Skip to Content
Home Uncategorized Consequences of overload. Why is this happening?

As a rule, during shipments, almost all Shippers do not pay any attention to the total weight of the cargo and the distribution of weight over the area of ​​the car or container trailer.
If, according to the terms of delivery, the sender is only responsible for packing and loading the goods, then in such cases, the Sender, by and large, does not care how to distribute the weight of the cargo and how much to load into the car in general.
But what to do when, when passing the border or at checkpoints of weighing along the route, the car will be put on the control scales? In this case, this will become a problem for the carrier. What to do in such cases? Do I have to buy broker training? How to avoid this? Is it possible to foresee and prevent it? Maybe!

The regulation of the transportation of goods is carried out by various regulatory documents that reflect the permissible standards for loading vehicles.

First of all, the owner of a truck should carefully study the passport of the technical vehicle, which clearly indicates the possible carrying capacity of this particular vehicle.

The mass of the truck and the axle load must not exceed the established standards.

Consider cargo transportation on the route from Europe to Russia.
When loading a standard truck, the sender tries to load the goods with a weight exceeding all regulatory standards.

There are two options here.
The responsible driver informs his management about this fact, he directly contacts the Customer – the Recipient and if this weight was not agreed earlier in the application for transportation, the Recipient is obliged to resolve this issue with the Sender. The carrier, in turn, has the right to refuse to transport cargo that differs in weight from the initially declared in the signed application for transportation. The application, as a rule, is an integral part of the transport agreement between the Customer and the Carrier and has great legal force.
Another point, if the Carrier deliberately does not want to lose load and spoil relations with the Customer, then usually there is an informal agreement to increase the cost of transportation. In this case, an experienced driver builds his route in a certain way, bypassing all weight control points. When crossing the border, the driver “negotiates on the spot.” Typically, such an arrangement costs the driver 100-200 Euros, depending on the total weight of the overweight.
Axle weights.
In addition to the total permitted weight, there are also permitted loads on the axles of the vehicle.

The axle load norms are also indicated in the PTS and depend on the number of axles.

The most banal and common loading mistake is the fact that the Sender tries to load the heaviest load at the beginning of the container or car body. Immediately there is an overbalance on the front axle of the vehicle.

How to avoid overweight on the axis? 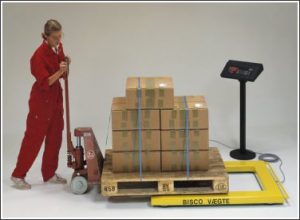 Overweights on the axle when loading a car, an experienced driver can even control visually, because. in most cases, there are no general truck scales at the place of loading, much less for weighing along the axes. The Driver has the right to give instructions to the Sender on the loading and distribution of cargo in the car body. But what if the driver accepts a container for loading at the port that came, for example, from China and no one has a clue how the cargo is distributed inside?

First of all, it is necessary to coordinate with the client in advance the additional total weighing of the car with the container and weighing along the axes. In the European ports and ports of the Russian Federation there are always common scales, and they are quite accurate with a minimum error. Also in many ports there are scales for weighing along the axes. Yes, these are additional costs from 40 to 150 Euros, but this is also a guarantee that there will be no huge fines along the way. After all, it is the carrier and the company that owns the car that will be required to pay fines, because. from the moment of acceptance for transportation of such cargo by the Sender and until the moment of its transfer to the client, the responsibility lies entirely with the carrier.